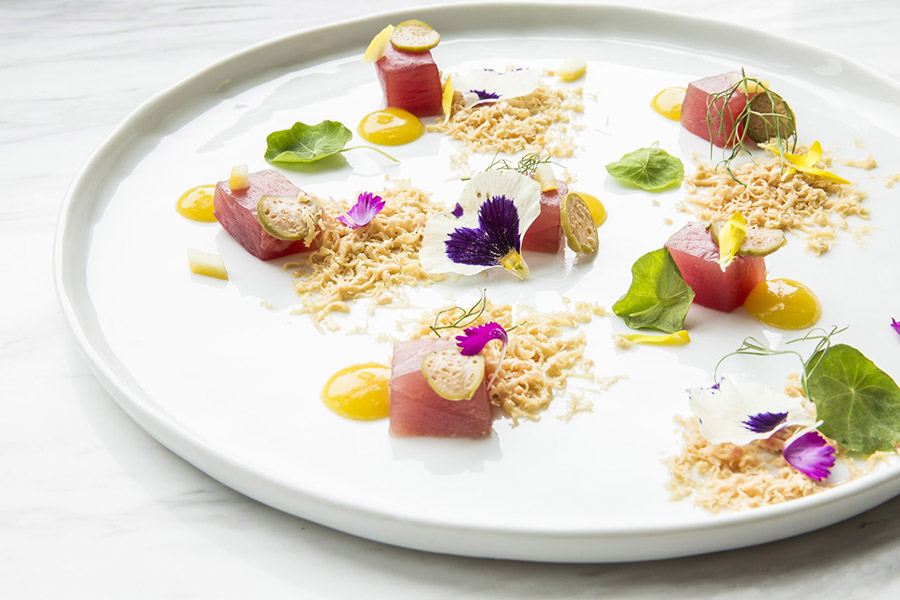 The highly-anticipated new restaurants from Houston Astros owner Jim Crane are set to quietly open this week with a powerhouse new kitchen team, PaperCity has learned. In a week of Super happenings, the one that happens almost under the radar is liable to leave some of the most lasting buzz.

Crane’s restaurants have gone through multiple name changes — and a major chef shakeup — to get to this point.

In the end — after mutually parting ways with celebrity chef Bryan Caswell — Crane went with a man used to his exacting demands. Michael Parker, who helms the culinary operations of Crane’s  ultra high-end Floridian National Golf Club, will be the executive chef. Micah Rideout, the former chef at Asian hotspots Tarakaan and KUU, takes on the role of chef de cuisine for Crane’s new Houston restaurants. David Berg, Houston’s own Bakery Magician, is the pastry chef.

This new chef team speaks to the scope of Crane’s ambitions for the new restaurants at 500 Crawford, the Marvy Finger mid-rise that overlooks Minute Maid Park. Crane yearns for the more formal of the two restaurants, an Italian fine dining spot now named Potente, to be recognized as one of the very best restaurants in Houston. This is an extremely personal project for the Astros owner.

In his first foray into the culinary world, Crane’s named the restaurants after his kids. Potente is the Italian translation of his youngest son James’ nickname. Potente means mighty in Italian. Osso & Kristalla — the more casual all-day cafe — is named after his son Jared and daughter Krystal’s nicknames.

These final names end quite the naming odyssey. When plans for the restaurants were first revealed, they were dubbed Brocca and Il Panchina before morphing into Osso and Kristalla. Now, Osso & Kristalla are one restaurant and Potente is the showpiece high-end spot.

Potente will be going full force for this upcoming Super Bowl weekend, but a restaurant spokesperson tells PaperCity that it will be likely exclusively limited to private dining for openers. With its prime location, right next to Minute Maid (the site of Monday’s night’s media day and Super Bowl opening night extravaganza) and its short walking distance from Discovery Green and all the NFL-booked downtown hotels, Potente has already drawn plenty of big game power player interest.

Yes, Roger Goodell may get to eat there first. But the plan is to be open to everyone shortly after.

Crane’s culinary dream team has been putting out test dishes since last week. The results show that Rideout’s Asian influences make an major impact on the Italian menu. This will be a cutting-edge modern restaurant rather than a throwback traditional Italian spot. (See an exclusive photo of the new food in the slider above this story).

Jim Crane’s new restaurants have gone through a number of changes pre-opening, but they’re here now — and as ambitious as the Astros’ self-made mega-millionaire owner himself.

For more, read PaperCity’s exclusive profile of Jim Crane in the February print issue of PaperCity magazine, on newsstands now. Crane talks Astros, fiscal responsibility, his vision for downtown and the new restaurants — and you get an exclusive look at his behind-the-scenes day-to-day operations.